In February 2019, and new patient arrived at the Heel clinic requesting assistance with his plantar fasciitis management. Both feet were severely affected by an acute and chronic case of plantar fasciitis which was causing extreme heel pain and also moderate discomfort through the arch of both of his feet. This gentleman was 62 years old, retired and enjoyed playing golf three or four times per week. The patient described all of the typical symptoms of plantar fasciitis, namely pain first thing in the morning when his feet touched the floor. The pain was excruciating and would cause the patient to limp. After he had taken his morning shower and was weight bearing for more than 10 minutes the pain did not subside, and this is not typical of a regular and chronic case of plantar fasciitis. Clearly, this patient was desperate for some help with his plantar fasciitis management. This gentleman explained to the sports podiatrist that he had been using the same golf shoes for 3 years but was reluctant to change because they were extremely soft and very comfortable. This patient would struggle to complete the first nine holes and experience extreme discomfort on the back nine. He had reluctantly begun using a golf cart in order to get around the golf course without extreme discomfort. Like most golfers, this gentleman was reluctant to stop playing and instead was actively seeking plantar fasciitis management from qualified medical practitioners. The plantar heel pain was so severe that this patient had begun using anti-inflammatory medication. He explained to the podiatrist that the improvement from the medication was minimal and not worthwhile, and to this end he decided to stop using the tablets. Other temporary relief came from the application of heated water bottles underneath both of his feet at the end of the day. He would also visit his local reflexologist in order to receive some foot massage but he found that the plantar fasciitis was not improving. The heel pain persisted and he realised that his plantar fasciitis management needed more than reflexology.

This patient explains to the sports podiatrist that he had also tried to stretch the bottom of his feet using a beach towel and there was mild but short-term improvement. However, long term this was not proving to be beneficial. The plantar heel pain persisted and the arch pain was also evident. Another home remedy for the plantar fasciitis that the patient attempted was to drop his heels off the edge of a step. He explained to the sports podiatrist that he felt a good calf muscle stretch while performing this exercise and again he felt short term relief in the base of his heel. To this end, he continued to perform the stretches for several weeks before learning that the condition was actually becoming more severe.

Becoming frustrated, the patient decided to try rolling his feet on a frozen bottle of water. He explained that the ice relieved the discomfort slightly but that the pressure from the bottle was irritating the heel bone. The patient ceased performing this home remedy and paid a visit to his local GP.

Plantar Fasciitis Management by the GP

This patient experienced approximately 3 weeks of pain relief from one of the injections into his left foot and 4 weeks of relief on the right side.

The sports podiatrist as part of his plantar fasciitis management, carried out a careful physical examination. The patient demonstrated a severe jump response when mild finger pressure was applied to the base of both heels. The podiatrist confirmed to the patient that he did in fact have an acute case of plantar fasciitis. 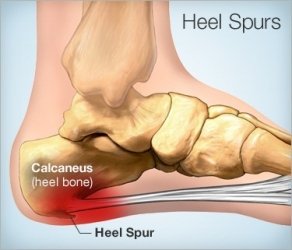 Plantar fasciitis management should involve more than one factor. It was clear with this patient that his footwear was a huge part of his problem. It was explained to the patient that the most successful way to treat the plantar fascia is to physically unload it and in his case this would require a new pair of firm golf shoes. The soft liner from the golf shoe was to be removed and replaced with the prescription touch and hold orthotics. These orthotics are designed to touch the base of the foot and hold the plantar fascia in place, without pushing the arch of the foot higher than its desired resting point. Please note that orthotics which are designed with aggressive arch supports will in fact irritate the plantar fascia by pushing against it with too much force.

As a temporary form of support the sports podiatrist applied rigid sports type to the patient’s feet in order to help stabilise and reduce load through the soul of the foot/ Plantar fascia.

This patient had also developed rigidity in both of his calf muscles and Achilles tendons and therefore he was instructed to stretch on a regular basis with his foot in a supinated position. Please note that foot pronation during any calf stretch will elongate and therefore irritate the plantar fascia.

Due to some specific findings with this particular patient he was instructed to cease the application of warm heat packs against his feet and instead the use of soft ice gel packs was to be applied for at least 30 minutes every evening before retiring to bed. These ice packs were applied with compression and both feet elevated throughout.

After 2 weeks of using the prescription insoles the patient reported a slow but steady improvement, and therefore the podiatrist decided not to change the plantar fasciitis management plan of this patient. He was advised to continue performing calf muscle stretches and was advised to continue using ice packs under the soles of his feet on a daily basis. In order to accelerate the healing, the patient was also placed on a course of shockwave therapy treatment. He received one session per week for the following 3 weeks. Shockwave therapy often forms part of the plantar fasciitis management plan for many patients attending the Heel clinic and it is used due to the fact that it has been found to accelerate the healing of the condition. It should be noted that shockwave therapy is not the single most reliable plantar fasciitis treatment but is commonly used in addition to other treatments.

Naturally, as with most patients, this person was concerned that his plantar fasciitis would return and requested a long-term plantar fasciitis management plan, in order that he would not suffer the same heal pain again in the future. The patient was given a list of things to be aware of and was reminded of the early signs and symptoms of plantar fasciitis. He was given a list of some of the simple solutions that he could implement himself if the early signs of the condition returned. These included but were not limited to stretching techniques and footwear selection.

After 6 weeks of treatment this patient reported an improvement of approximately 75%. The pain in his heel first things in a morning had reduced from a vas score of 9/10 down to 3/10. He reported to the sports podiatrist that his early morning heel pain subsided much more quickly since using the orthotics. This patient was able to return to the golf course and did not need to use the cart at the 6 week point of his plantar fasciitis management plan. He did not feel excruciating heel pain following his 18 holes of golf and there was no further throbbing sensation or stabbing sensations. The new golf shoes that the patient purchased as part of the plantar fasciitis management plan were robust and supportive due to a carbon fibre shank through the sole of the shoe. This created much more rigidity and high level of support which is needed for long periods of time walking on the golf course.

This patient was advised that he did not need to attend the heel clinic for any further appointments due to the significant improvement in his condition. He was advised to email the clinic or call if he felt that was an increase in his heel pain symptoms.

This article was written by Karl Lockett

Podiatrist at the Heel Clinic