A 62-year-old female presented to the Heel Clinic complaining of heel pain after walking. She had been suffering with this condition for approximately 12 months and had tried several treatments. She reports to the sports podiatrist that in addition to the heel pain when walking she also felt considerable pain approximately 1 or 2 hours after her exercise Furthermore, she described pain first thing in the morning under the base of her heel. The discomfort that this patient was experiencing was in her right foot only, and her left heel was asymptomatic. She also described some calf muscle cramping which occurred most evenings. She had been experiencing cramps in both of her ankles and calf muscles for the last 3 to 4 months. On occasions the heel pain after walking increased to a stabbing sensation and the patient described this as a hot knife going through the soul of her foot. She had never before experienced heel spurs or plantar fasciitis nor had she experienced any biomechanical foot or ankle conditions. However, she did present with big toe joint dysfunction which appeared to be arthritic. This patient would sometimes experience discomfort through this first toe joint, but this had been troublesome for many years. This patient experienced significant heel pain after walking uphills as well as on flat level surfaces. She reports to the sports podiatrist that her usual body weight is approximately 85 kilos, but she currently weighs 102 kg. She understands the implications of excess body weight and the effect that this has on the calf muscles and foot conditions. The GP recently tested for diabetes and all was fine. Her GP also referred her and for an x-ray which revealed a 3 mm plant a calcaneal spur. Please note that modern science accepts that plantar heel pain is not necessarily a direct result of plantar heel spur. Modern science now focuses more on the plantar fascia and understands that plantar fasciitis is more often than not the likely cause of plantar heel pain. 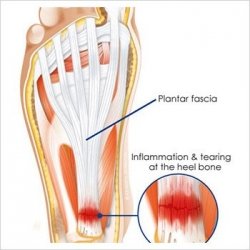 What was the Possible Cause of the Heel Pain After Walking?

In order for the podiatrist to determine the severity of the condition, and the possible reasons why the patient had developed heel pain after walking, a detailed biomechanical assessment was carried out in addition to a thorough physical assessment.

The most obvious finding was the lack of support from the footwear that the patient was using for her daily walking routine. The shoe did not have an elevated heel and the midsole did not provide sufficient support. The forefoot had become softened and flexible and allowed the foot joints to displace. The lack of support from the shoe would likely have been a contributing factor in the onset of the tight calf muscles and the patients heel pain after walking.

During the physical assessment this patient demonstrated an extreme jump response when physical pressure was applied to the base and the medial aspect of the heel. The patient retracted her foot and winced. She immediately felt a sharp stabbing pain which took a few seconds to subside. She then described a throbbing sensation which lasted approximately one minute. The majority of patients that feel heel pain after walking do not always demonstrate such a large jump response to the physical pressure that is applied. This indicated to the sports podiatrist that this particular patient had developed an acute condition which possibly involved micro tears within the plantar facia and certainly extreme inflammatory change within the tissue. The severity of this patient’s condition would significantly impact the treatment plant.

This patient also advised the sports podiatrist that she felt extreme heel pain after walking on the treadmill within the clinic. The patient was asked to walk barefoot for approximately 90 seconds while the podiatrist analysed her gait cycle, but she was only able to manage less than 30 seconds. Again, this would indicate a severe case of plantar fasciitis, possibly with micro tears and severe / acute inflammatory change.

This lady advised the sports podiatrist that time was against us as she had planned a walking holiday in Spain and was desperate to be well prior to departure. She was leaving for Europe in less than six weeks. This trip was booked and paid for with a large group of friends and she was committed and desperate not to miss the holiday. She advised the podiatrist that even if she felt heel pain after walking in Europe, this would not deter her from attending the holiday.

This patient was informed that her case was quite severe and required significant intervention. To this end, the podiatrist advised the patient that her foot would be strapped with rigid sports tape and then placed inside a full height immobilisation boot / cam walker. This would maximally unload the plantar fascia and reduce the strain through the connective tissue. The patient would not feel any heel pain after walking with the immobilisation boot in place. The patient was asked to walk around the clinic for 3 to 4 minutes and provide feedback. She did not feel any heel pain after walking around the long corridors and rooms of the medical centre.

The patient was provided with the Heel Clinic mobile phone application which contained advice and information relating to stretching therapy and home rehabilitation. This would be crucial in order for her to recover quickly. She was asked to return to the clinic in one week.

At the one week follow-up appointment the patient reported that she was able to walk comfortably with the boot in place without any discomfort. She informed the sports podiatrist that the immediate start-up pain which is normally felt first thing in the morning when rising from bed was much less. However, she did feel some heel pain after walking to the bathroom, but this subsided quite quickly after her morning shower. She had been compliant with home rehabilitation and the reapplication of the rigid sports tape.

The sports podiatrist advised the patient that because her heel pain after walking was dissipating, the treatment plant would not change and she would be reviewed in a further two weeks. After three weeks the patient reported an improvement of approximately 50%. The patient was asked to return to the clinic in a further two weeks which would equal five weeks of treatment with the immobilisation boot. At this appointment, there was further improvement, as to be expected, however the condition had not completely resolved. The morning pain had all but disappeared, but the heel pain after walking was still present, albeit mild.

Heel Pain After Walking Through an Airport

The sports podiatrist advised the patient that she would feel significant heel pain after walking through an airport due to the long distances between gates and the hard tiled floors. To this end, the patient was advised to use her immobilisation boot when passing through the airports. She was instructed to remove the immobilisation boot just before take-off. She was requested to reapply the boot after landing and to use the boot through the airport.

The Plan When Walking in Spain

Due to the fact that this patient’s condition had almost reversed, she was advised to walk in Spain without the boot to the point of maximum discomfort. She had agreed to use rigid hiking boots and to keep her foot strapped with rigid sports tape. If her condition reversed significantly and if she noticed significant heel pain after walking, then she was advised to reapply the immobilisation boot if necessary. Her stretching program and home rehabilitation must also continue.

No further appointments were made and this patient did not need to return to the clinic. Her file was closed. Please note that the information contained in this case study is specific to one particular patient at the heel clinic, Aurora Place. If you feel heel pain after walking or if you think you have plantar fasciitis please contact the clinic on 8211 0600. The clinic can also be reached on the following email address receptionist@heelclinic.com.au