A middle-distance runner, 38 years of age arrived at the Sydney heel Pain clinic with a plantar fasciitis diagnosis of approximately two months. This gentleman informed the sports podiatrist that he was experiencing significant pain under the base of his right heel which felt like a stone bruise in his shoe, with a mild throbbing sensation. His physiotherapist had made the plantar fasciitis diagnosis and had been treating him conservatively twice per week. Since the plantar fasciitis diagnosis had been made, he reported little to no improvement with the treatments that he had experienced to date. The physiotherapist had been using ultrasound machine and dry needling techniques. The physiotherapist had advised calf muscle release in the form of deep tissue massage and had also advised the patient to perform regular calf stretches. The patient informed the sports podiatrist that he had been compliant with stretches but was seeing little improvement. The patient informed the podiatrist that he was concerned that the plantar fasciitis diagnosis was incorrect and that there may be some other condition causing his severe heel pain.

The Symptoms of Plantar Fasciitis Diagnosis

This patient described severe pain first thing in the morning when rising from his bed which is a common symptom with plantar fasciitis diagnosis. He described an improvement within the first 15 minutes of walking each day and that the pain then becomes more bearable. He also describes the feeling of a pebble in the shoe and is aware of the heel pain when standing up from a seated or rested position. There was also a mild throbbing when lying in bed at night. Also common in people with a plantar fasciitis diagnosis.

The sports podiatrist explained to the patient that it would be crucial to unload the plantar fascia in order for the condition to reverse. Due to the severity of this patients condition he was prescribed an immobilisation boot. There were also discussions around other methods of unloading the plantar fascia but due to the patients high pain level and inability to walk without severely limping, it was agreed that the immobilisation boot would be the preferred treatment of choice. Once the plantar fasciitis diagnosis has been made it is also important that the patient become educated and informed of things to do and things to avoid. The Sydney heel Pain mobile phone application was installed on the patients device which would ensure the correct treatment plan was maintained.

This patient returned for a follow-up assessment of his plantar fasciitis three weeks later and reported a significant improvement in his condition. He informed the sports podiatrist that there was no pain first thing in the morning and that he was able to walk short distances without the immobilisation boot, and without feeling any discomfort. It was decided to cease treatment with the immobilisation boot and to continue supporting the patients right foot via the use of rigid sports tape. The patient was slowly re-introduced to physical activity and was advised to return to the clinic if his symptoms returned or if he stopped improving.

Included in the patient advice was running style and footwear selection. No further appointments were made for this patient as his condition resolved without further intervention.

If you are struggling with heel pain or have been given a plantar fasciitis diagnosis you should seek the help of a suitably qualified sports podiatrist or other healthcare practitioner. Please note that the information contained in this article should not be taken as general medical advice. 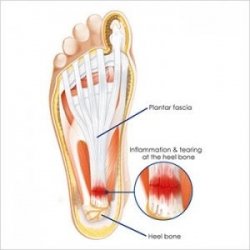