Is there a Proven Achilles Tendonitis Home Treatment?

This gentleman described an increase in his symptoms each morning when he woke and began to walk around his bedroom. The stiffness and heel pain would begin to subside within the first 20 minutes of his day. Typically, this patient also described start-up heel pain which he would experience after long periods of being seated. Achilles tendonitis home treatments were not helping with these symptoms and his condition was becoming chronic. In frustration he went to see his local GP who referred him for ultra sound imaging. The report from the imaging centre confirmed thickening of the Achilles tendon approximately two centimetres above the insertion at the heel bone. There was inflammatory change surrounding the tendon, consistent with Achilles tendonitis. The GP advised the patient to stop the Achilles tendonitis home treatment but instead seek the help of a sports podiatrist.

This patient was advised to avoid the other types of Achilles tendonitis home treatment, of which there are many. Some of the existing treatments have been advised for many years and can be described as traditional. Exercises such as dropping your heel off a step or raising up onto your tiptoes are some of these traditional therapies but have been found to be less effective in some people.

If you have tried Achilles Tendonitis home treatment but still experience stiffness and pain you may benefit from an assessment with a sports podiatrist.
Podiatrist Karl Lockett
Heel Clinic
8211 0600
www.heelclinic.com.au

The following stretch has mixed results and can prolong symptoms in some patients. 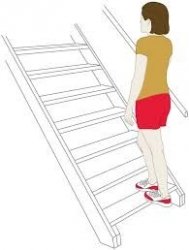